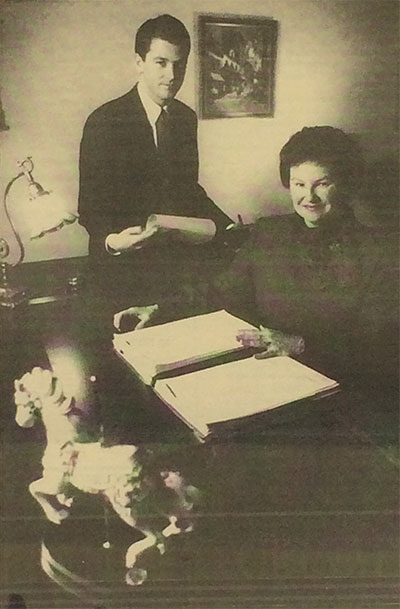 Beverly McFarland knows an opportunity when she sees one. Sometimes it’s there for everyone to see. Sometimes, though, opportunity is found in odd places that escape the notice of most people. And occasionally, a business can find opportunity even in a disaster like the savings and loan crisis.

McFarland saw the possibilities right away. Hundreds of savings and loans collapsed nationwide. Real estate, loans and other assets worth billions of dollars wound up in the hands of the federal government. The Resolution Trust Corp.–the federal agency set up to dispose of insolvent thrifts –was going to need help.

So, McFarland stepped in and offered the services of her company, The Beverly Group Inc. Based in Sacramento, it already had gained expertise helping financial institutions and government agencies manage troubled assets. The strategy already is bearing fruit.

The contracts have helped fuel the rapid expansion Beverly Group has enjoyed since McFarland created it in 1983. The company was essentially a one-person show in the beginning, though she had part-time help from her son, Kevin Whelan. McFarland financed the venture with the help of a $10,000 loan from a friend.

Today, the company has about 40 employees, including Whelan. A graduate of the University of Southern California with a bachelor’s degree in business administration, he’s now the chief financial officer. And McFarland’s husband, David, works as the company’s compliance officer.

To help handle the RTC contracts, the company has opened offices in Denver and Tampa, Fla. After the RTC takes over an insolvent thrift, the agency sometimes sells off part of the assets before closing the institution’s doors. Often, though, it takes bids from companies like Beverly Group to manage and dispose of foreclosed real estate, problem loans and other assets.

The companies receive monthly management fees and get to keep a part of the revenue they generate disposing of the assets under their control. Companies like Beverly Group usually sell problem loans, restructure them or foreclose on the property that secures them.

From the beginning, the firm relied heavily on Beverly McFarland’s knowledge of the real estate industry. Her background includes stints as a real estate agent and workout artist who handled troubled assets for savings and loans. In 1983, she decided to strike out on her own because she didn’t see much opportunity for advancement in the savings and loan industry and figured she could make more money owning her own business. At the time, income was a critical issue. She was a single parent with two children in college.

The Beverly Group earned total revenue of about $75,000 during 1984, its first full year of operation. Last year, gross receipts had grown to about $3.5 million.

The Beverly Group isn’t sure yet how lucrative the contracts with the RTC will ultimately be. ‘It’s a fixed-price bid on a moving target,’ said Whalen of the first contract. ‘So far, we’re pretty much on target for what we budgeted initially.’

Costs are heavy in the beginning because of the high overhead expenses, including the need to open new offices. McFarland noted her company’s bids had substantial contingency allowances built into them just in case expenses ran high or revenue lagged.

‘You take a risk, a big risk, when you take on one of these contracts,’ Whelan said. Built into the contracts are incentives that encourage The Beverly Group to recover as much as possible. Kevin Shields, a spokesman for the RTC, reported that the first contract pays the company $163,000 per month in management fees, plus 1.7 percent of the proceeds from loans it disposed of during the first year of the three-year contract. The company’s
cut of the proceeds declines during the second and third years.

‘The idea is to dispose of as much as you can as fast as you can with the most recovery,’ Shields said. ‘We try to get as much money for the taxpayer as possible. That’s the ultimate purpose for us being here.’

Industry observers said it’s hard to know whether companies like The Beverly Group make much money from RTC contracts. ‘I don’t have a feel for that and I don’t think anybody-does,’ said Bert Ely, a banking consultant in Alexandria, Va., noting that much of the financial data isn’t made public. ‘I have not heard of this being a super-windfall business.

Unless you’re very good at government contracting, I don’t think you are going to make much money.’ Ely said a few experienced companies seem to be making good money, but many spent lots of money to get into the business, then find out the hard way their return isn’t as great as anticipated. Competition for RTC contacts can be fierce. ‘But I think a lot of people get scared off also,’ Ely said, pointing to the many bureaucratic hoops companies sometimes have to go through to win RTC contracts.

Whelan reported that two years ago, there were only about 26 asset-management firms nationwide similar to The Beverly Group. Today, there are nearly 150.
The Beverly Group has been profitable from the beginning. Even in 1984, the company enjoyed a healthy profit by keeping costs low. McFarland worked out of her house in those days and had few bills other than travel expenses and telephone bills. She estimated that overhead expenses consumed only about 30 percent of 1984’s revenue.

The company has managed to stay in the black every year since then. ‘Some years are more profitable than others, obviously,’ McFarland said. She isn’t about to sit back and enjoy her good fortune, though.

At that moment, the RTC contracts account for about 90 percent of her company’s business. She knows a businesses shouldn’t depend too much on any one customer, so she’s making plans to diversify. ‘You cannot serve one master,’ she said. ‘You must diversify within your means.’ As part of its diversification drive, The Beverly Group is expanding into another niche: managing loans, foreclosed real estate and other assets for insurance companies.

The RTC won’t always have huge inventories of assets to unload. Shields, the RTC spokesman, reported the agency had disposed of $218.4 billion in assets from failed thrifts as of Nov. 30, including $85.6 billion in mortgage loans and $18.4 billion in other types of loans. It still had $136.9 billion left to unload, including $28.5 billion in non-performing loans.

The agency also is moving more and more to unload problem assets through auctions and other direct action that  tends to leave asset managers on the sidelines.
‘In the early days of the RTC, I was very critical of the asset management activity,’ Ely said. Some companies that deal with the RTC spent too much energy managing assets and too little disposing of them, he said.

About a year ago, the federal agency began turning to auctions and other direct action partly to blunt criticism that it
was taking too long to dispose of the assets under its control.

These days, the RTC sometimes sells assets after a failed thrift is placed into federal conservatorship, but before it closes its doors and falls into receivership. Shields noted that the agency also sometimes dips into the portfolios of asset managers to package similar assets together so they can be sold directly.

Whelan said he’s convinced asset managers get a better return than the RTC does, emphasizing that the former have
more expertise dealing with problem assets.

Often, problem loans are purchased by collection companies intent on recouping as much money as they can from borrowers, Ely said. Sometimes, the buyers are investors interested in foreclosing on the loans so they can get at the real estate that serves as collateral.

Whelan added that sometimes the buyers are pension funds or companies looking for investments. ‘They can be very good investments,’ he said, if you are sure the amount owed is considerably less than the value of the real estate. ‘The key is to investigate what you’re buying.’